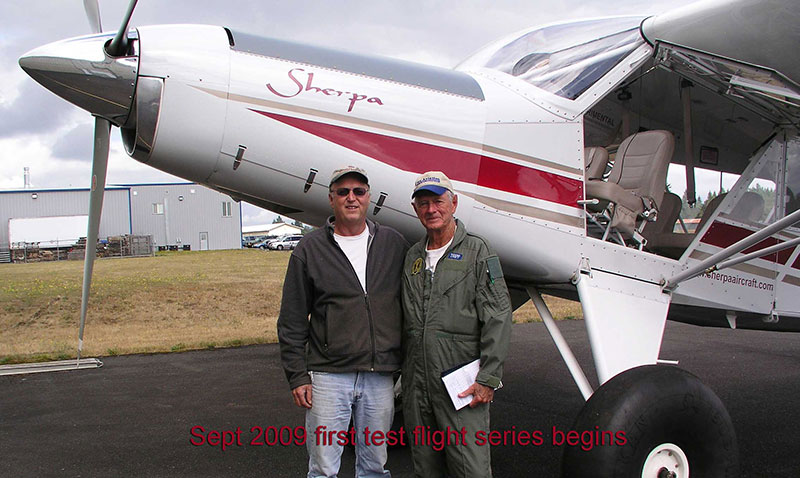 This is not an engineering analysis such as I would do for certification tests by the FAA. It’s a summary of my opinion on the flight characteristics of the latest version of the Sherpa aircraft. If you wish to know more about the background, you can find it on my website – www.bobtripp.com

The first flight was made at a mid-weight and CG, the second at the most forward and light weight position we could reach, and the third was an attempt to go for max weight and aft CG. The TPE-337-5 engine was limited to 766SHP for takeoff and max continuous power.

The first takeoff at 4946 pounds was an eye-opener. We were off the ground in less than 3 seconds before I could advance the power lever to full thrust.

This was with 120 gallons of fuel, two pilots and 100 pounds of ballast in the baggage area. This puts the CG at 25{5cd0c8c3bb34f5c59bd7781dd8e61e2c01aeccfbc005c2e548dc94fd26237b43} of the wing chord. The clean stall speed was 61 mph. 30° flap resulted in 38 mph with 15° nose up and heavy stick force requiring both hands. At this loading, there is no way a pilot would inadvertently stall the airplane. As expected at this CG the airplane was stable about all axes.

Another short takeoff was followed by an initial climb of over 2000 fpm. Stability in the clean configuration was quite positive as expected. In the 30 to 40° flap range, longitudinal stability is positive but the trim point can move easily. Our main purpose for this flight was to check power on stall characteristics. The first attempt, using 75{5cd0c8c3bb34f5c59bd7781dd8e61e2c01aeccfbc005c2e548dc94fd26237b43} power, resulted in pitch attitudes that were ridiculous, well over 30°. Backing the power off to 50{5cd0c8c3bb34f5c59bd7781dd8e61e2c01aeccfbc005c2e548dc94fd26237b43} gave stall speeds less than 40 mph with flaps 30° and less than 35 mph with flaps 40. With 30° flaps buffet started at 55 mph and was at least 20 pounds of pull force required at the stall. With 40° of flaps there was continuous take shake probably caused by a combination of power setting and strong down flow produced by the flaps. Basically, the airplane should not be flown with 40° flaps and power on. This means that if you are doing a go around maneuver with 40° of flaps set, they should be retracted immediately.

This was a 2:40 flight at max weight, 6482 pounds, full fuel, 260 gallons, 715 pounds of ballast, giving an aft CG 32.5{5cd0c8c3bb34f5c59bd7781dd8e61e2c01aeccfbc005c2e548dc94fd26237b43} wing chord. In an airplane of conventional configuration and a CG is far aft, the airplane will be nearing its neutral point. That means that stability will be zero to negative, and the airplane will tend to pitch up with power on its own. Obviously, this would be a limiting factor in any airplane’s maneuvering envelope.

Longitudinal stability in cruise climb and descent was positive, though at times relatively light, and on the release of the stick would sometimes oscillate back through the original trim speed. Interestingly, cruise stability was done at less than 75{5cd0c8c3bb34f5c59bd7781dd8e61e2c01aeccfbc005c2e548dc94fd26237b43} power. That setting would drive the airplane to the top of the green are at 170 mph.

No formal terms tests were run, but trim was adequate within the range we flew. At the present time there is no trim cut off switch on the stick. However, for a runaway trim situation, the procedure would be flight idle, slow below 90 mph, and extend 10 to 30° of flaps. At that point the trim can be run to any extreme position without control forces being high.

Sherpa Aircraft Company has developed a single-purpose airplane which meets its goals, to haul a large load out of a short strip. It is an unusual airplane with some unusual characteristics. It does its unique mission with quite some flair. It is tempting to call it a Super Club on steroids. Actually, though it may look like that, it is entirely different airplane. With its high power loading and low takeoff and approach speeds, it is not on airplane for the inexperienced pilot.
However, with a good check out, a pilot can accomplish his mission into primitive airstrips with loads that would humble almost any other airplane. 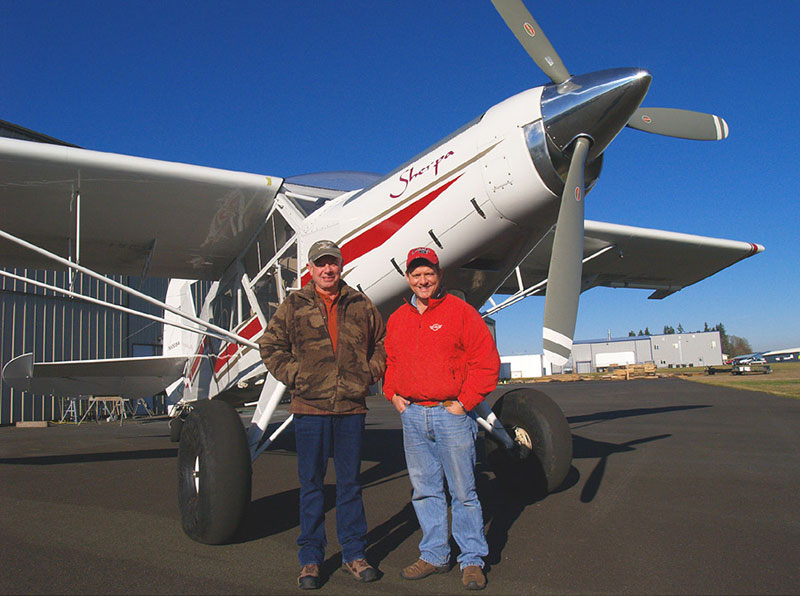 Bob’s big grin tells it all…shown below Bob Payne of Lewiston, ID (L) and Sherpa test pilot Pat Warren, after completion of the test flight. Bob is a pilot with over 25,000 hours. 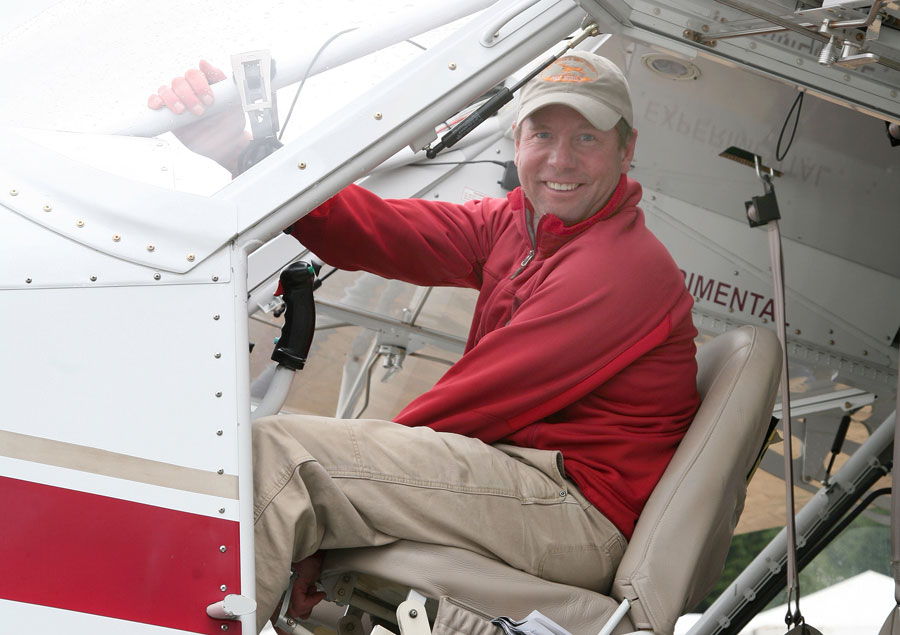 July 13th, 2009 – Well known Alaskan bush pilot, Paul Claus’ grin tells it all after completing the first test flights at the recent Arlington Fly-In. Paul gave the new turbine Sherpa tail dragger a thumbs-up as being the next potential replacement for much of the old Otter and Beaver bush plane fleet. Paul’s experience for flying the Alaska bush comes from 25,000 logged hours of flight time in the North Country in about everything that has wings. Paul felt that the new Sherpa would be outstanding for his use with a little more tweaking and FAA certification. Paul’s complete interview is included in Sherpa’s new video that will be shown at this year’s Oshkosh event.