The old song, “You can’t have one without the other”, pretty much sums up the recent development in the design requirements for the latest 8 place 650T turbine slated for delivery to Alaska. As crazy as it may seem, we made some aerodynamic design change improvements to the wing and flap system to improve the speed range of the aircraft that turned out far more effective than we hoped for. After completing an upgrade to the design of the trailing edge of the wing and flaps and the nesting position of the flaps our slow speed performance dropped from the mid-40s to the low 30s and our cruise speed increased by 10 to 15 MPH. As a result of this unexpected major impact on the airspeeds it became difficult to reach the low speeds that allow the desired three point stall landing. One would normally think that with an aircraft, the slower the better. In this case however, we were able to fly so slow that the tail surfaces weren’t getting enough air flow to remain effective and the 840HP 331-5 engine that normally powers aircraft that land at much higher speeds produces so much thrust at the standard idle cut off setting we couldn’t slow the airplane down under 50 MPH. When we used full flaps at 40 degrees to slow the airplane down we made matters worse by creating so much disturbed air that we blank out the tail.

One of the first issues we are dealing with is to adjust the normal propeller blade angle from 4 degrees to 1.5 or 2 degrees as was necessary on Sherpa’s first turbine prototype. This change should reduce the thrust so that the airplane can slow down. In addition, a relocation and complete redesign of the old style Super Cub flat horizontal stabilizer and elevator is being modified to include a flying tail that was originally considered for the original 650T prototype. It is likely that the flaps setting will also be restricted to 30 degrees or less as was the done in the original flying prototype. 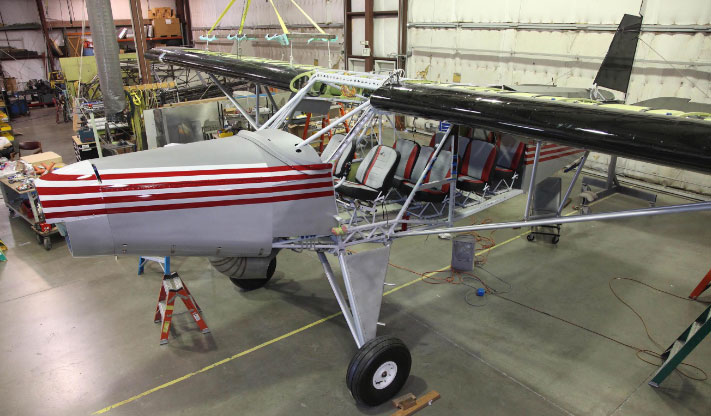 The company understands the challenge of producing an aircraft that pushes the limits in so many areas:

Put that all together with a Sherpa’s tough undercarriage and structural design with great pilot visibility and you end up with the best of all worlds.